If you want to know where the Pentagon is dropping taxpayer dollars in vast quantities, look for big rolling objects.  That’s the word from an analysis by Michael Fabey in AvWeek’s Aerospace Daily and Defense Report.  Here’s an excerpt:

While the Pentagon lists tracked combat vehicles, wheeled combat vehicles and trucks as individual line items within the top 10 of the Defense Department expense list for 2010, the three categories together tally up to about $12.8 billion, which would put them at the top of the list — the same spot their combined total occupied a year ago, according to an Aerospace DAILY analysis of data provided by the National Institute for Computer-Assisted Reporting.

Tracked combat, assault and tactical vehicles lead the ground expenses with about $5 billion in contracts and modifications, the analysis shows — good enough to place fourth in total individual-line Pentagon transactions.

Pending any decisions on force strength in Afghanistan, this looks to be an area where the Pentagon will be forced to spend dollars for quite a few years to come.  Given the number of metals manufacturers in Portland and Seattle that supply the heavy vehicles market, it’s a fair bet that a chunk of the supply chain is located around these parts.  Absent from the short list of big recipients is local favorite Daimler Trucks North America, which manufactures a number of large military trucks for Uncle Sam.

Kudos to Philip Ewing at DoD Buzz for catching the story.  Read the full article here. 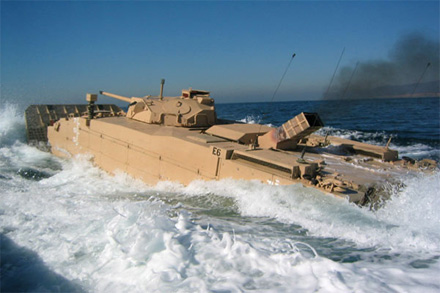 Will the Marine Corps be able to resurrect the ailing EFV buy?

It sounds like the Marine Corps is making some noises that indicate they’re not giving up on the  former Expeditionary Fighting Vehicle (EFV) program without a fight.  Marine Corps Commandant Gen. James Amos is on record as saying he wants to be driving some kind of Amphibious Combat Vehicle before his tour is up.  From Defense Tech:

To avoid such a fate, the general said the Department of the Navy will be using a model similar to the one it used to quickly buy and field thousands of MRAPs during the height of the Iraq war.

“Something probably that resembles the sense of urgency that we had for the MRAP but probably a little bit more scheduled, and that’s what we’re going to do.”