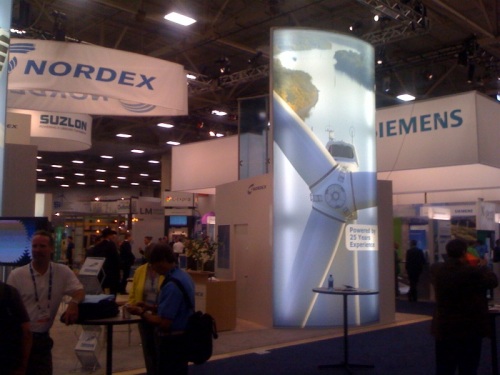 Made in America? Not so much.

So you’re probably asking… “Why is a defense guy at a wind energy trade show?”  Well, it’s a long story.  In the interest of maintaining my (already miniscule) readership, I’ll spare you the details and get to the point:  the US manufacturing base is getting our butts kicked in a big-time emerging industry.

For those who live solely in the world of defense contracting, things don’t always seem so bad.  With made in the US requirements, the DoD manages to keep some of our advanced manufacturing base in business.  After this week at the American Wind Energy Association’s (AWEA) annual trade show, I’ve got a little less swagger.  Walking the floor at AWEA felt more like a China-Europe expo with a nod to the American host country.  Nearly all of the major OEM’s hail from Europe, and the Chinese have come a long way in a very short period of time in the metals business.

Granted, the US was late to the wind game, and the industry here is just getting started.  What concerns me isn’t our trailing position in renewable energy (although that’s important).  My worry is just how much of the fundamental stuff is now being done elsewhere.

If we want a healthy defense industry base, our manufacturers must have more customers than the DoD.  Seeing all those Chinese made ring bearings and gearboxes made my heart sink a little.    While a wind turbine is no F-22, there’s a lot more long-term money in it.  It would sure be nice if our manufacturers had something like this to keep their cash flow healthy.  Such economies of scale might just benefit Uncle Sam a little, too.

The Navy’s Going “Green”: Why You Should Care 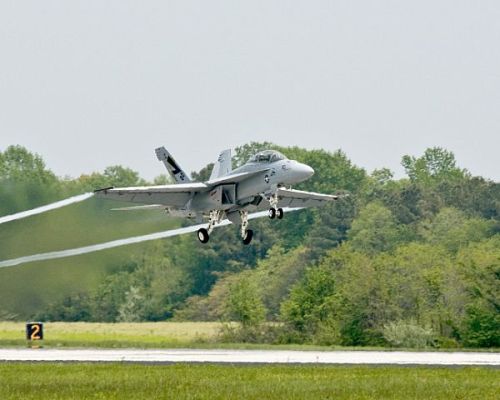 The Maiden Flight of the "Green Hornet"

It’s spring in the Northwest, and Green is everywhere.  It’s in our buildings, our power sources, cars, trains, planes…. you get the idea.  It’s hard to find an innovative idea that hasn’t at least attempted a Green angle for maximum exposure.  All of this “green noise” has the net effect of dulling our collective senses when it comes to news from the environmental front.

Now, let’s play a word association game… what color comes to mind when you think of the US Navy?

Probably not green (in fact, if you thought anything other than gray, you should schedule a visit to the doctor.)  The Navy isn’t widely percieved as a strong proponent of environmental causes.  That’s why the latest news from the Navy was greeted with a collective yawn in the media.  Flying an F-18 (known as the “Green Hornet”) on alternative fuels in interesting, but newsworthy? While there has been a lot of hype out there, I think this story is the real deal.  Here’s why:

Take a look at the list of the top 100 government contractors from 2009.  I count no fewer than 10 petroleum companies on the list, including two with names that hail from the Arabian Peninsula.  This list highlights two important facts: first, the military buys a LOT of fuel.  Second, a lot of that fuel comes from places that aren’t exactly friendly to US interests.  Green doesn’t seem so silly now, does it?

This probably isn’t new to a lot of you out there.  The Navy has funded wave energy research right here in the NW.  Energy security has been a topic for years, and will continue to be a consideration in defense policy for years to come.  Here’s why I think this matters:  it flew.  They put a new kind of gas into an F-18.  Quite a bit of that gas was grown here in the US.  They fired up the engines, taxied down the runway, and flew.  That plane soaring off the runway at Patuxent River, MD represents a big investment of dollars.  With the SECNAV in attendance, it looks like that investment is going to continue apace for the foreseeable future.

Here in the northwest, we’ve got a huge number of environmental entrepreneurs, many of whom wouldn’t know how to spell DoD.  While I don’t think you should count on Uncle Sam shifting entirely away from petroleum anytime soon, a small shift by the military could mean billions to renewable fuel firms.  I’m pretty sure that’s the kind of green we could all be happy with.